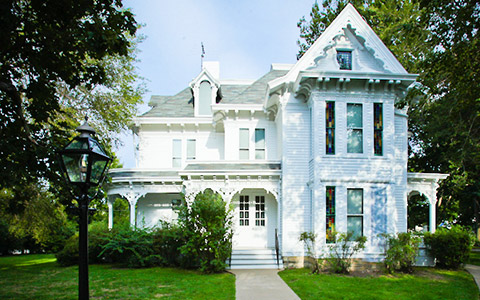 Discover Why Truman Loved His Hometown So Much

Before Harry S. Truman became the 33rd President of the United States and helped to create the United Nations and NATO, he was a proud resident of Independence, Missouri.

Whether you’re a history buff, an educator, or if you’re just looking for an awesome destination for your next vacation, it’s tough to beat a trip to Independence — in no small part because of the city’s Presidential history.

This post will help you to create your own Harry S. Truman sightseeing tour when you visit the city.

Be warned, though: places like the Truman Home, the Truman Courthouse, and Clinton’s Soda Fountain will make you never want to leave.

The Truman Home should absolutely be your first stop in Independence, MO.

It’s a stunning example of Victorian architecture and home to an incredible amount of history. Truman lived in the 14-room house from 1919 until 1972, and even had his wedding reception in the home.

This was also considered to be Truman’s “Summer White House” throughout his presidency.

You’ll learn about Truman and the time period of his Presidency by taking a tour of the Truman House.

You can get tickets to the house at The Visitor Center at 223 North Main, and tickets are given on a first come, first served basis. The home is closed on Mondays from November 1st to Memorial Day.

Yes, even the future President of the United States held down a day job.

In fact, Truman’s first ever job was at Clinton’s Drug Store, the home of Clinton’s Soda Fountain since 1988, on the historic Independence Square.

Children especially will enjoy snacking on ice cream and milkshakes here, and adults will love the experience of an old-fashioned soda fountain. You can even book a party here!

You should be certain to pay a visit to the Harry S. Truman Office and Courtroom, where you’ll get an excellent overview of everything Truman did in his long career as a public servant.

This was also the courthouse where Truman served as the county court’s presiding judge during the 1930s. Be prepared for several great photo opportunities!

Throughout his life, President Truman kept a fashionable pace everywhere he went. To honor his enduring love of walking and history, the City of Independence has created the Truman Historic Walking Trail.

Consisting of 43 sites, the trail features important places in the life of America’s 33rd president. Included along the way are landmarks and homes of Truman’s friends and associates, each marked by a descriptive plaque noting its significance.

From touring the Truman Home to visiting his presidential library, by the time you finish your visit to Independence, you’ll be a true expert on this man’s remarkable life.

Make sure that you also check out our events calendar to learn more about what’s going on in Independence during your stay.

We can’t wait to welcome you and your family to our wonderful city — we know you’ll instantly see why Truman fell in love with it.