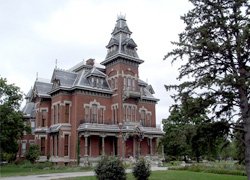 Built by Colonel and Mrs. Harvey Vaile in 1881, it was “the most princely house and the most comfortable home in the entire west,” the Kansas City Times reported in 1882. Situated on North Liberty Street, a mile north of the historic Independence Square, the three-story Gothic-like structure today sits in solitary splendor, an architectural anomaly among the surrounding Midwestern homes. The 31 room mansion includes 9 marble fireplaces, spectacular painted ceilings, flushing toilets, a built-in 6,000 gallon water tank, and a 48,000 gallon wine cellar. This mansion is one of the best examples of Second Empire style architecture in the United States.