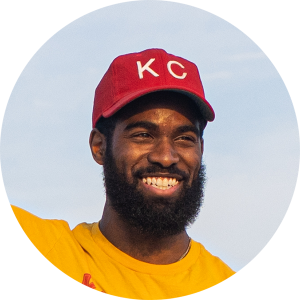 Jon Marzette is a designer, illustrator, DJ, and podcaster based in Kansas City, MO. He likes supporting good people who do great things for the community. He can be found at The Peanut every Wednesday eating hot wings.

For this Kansas City local, Independence is starting to feel like home. Rolling into town on a cloudy Saturday felt like coming back to see an old friend after a long while—familiar and like I had some proper catching up to do. Driving up to the Historic Independence Square in preparation for the Kansas City Royals game gave the air a bit of a buzz.

The last time I had been to the Square was during the peak of COVID-19, and unfortunately, many of the shops were temporarily closed. During that trip, my fiancée, Ann, and I had the pleasure of eating at Ophelia’s Restaurant & Inn but only got to try the delicious dining. This time we looked forward to experiencing the inn and got the chance to stay there for the evening. Checking in was simple and easy—a great way to ease into our stay in preparation for game day. Our room was spacious, and the bed was super cozy. It was the perfect place to come back to after a day at The K (aka Kauffman Stadium, home of the Royals).

Step back in time

When we slid into town, the clouds were rumbling and so were our stomachs. Our first stop? Brunch at Englewood Café, a quaint little diner right at the end of the Englewood Station Arts District. When I walked in, I felt as though I was transported back to 1965. This is the type of place where all of the tickets are handwritten, and orders are called out from across the room. We sat down, and our waitress was so full of character that she more or less ordered my brunch for me. She talked me out of the fried fish to let me know that the tenderloin was the way to go. She wasn’t wrong at all. The tenderloin was about as big as my head! While I ate, it was like I was at my grandma’s house savoring a home-cooked meal. Everyone talked like they were old friends or neighbors. I felt like I was a part of the family. After I finished eating, I felt refreshed and ready to keep things moving.

My next step was 1st and 10 Sports Collectibles, just down the street. If the café was the definition of your grandma’s kitchen, then this was like going into your sporty uncle’s basement. It was full of vintage finds, sports cards of all eras, and tons of knickknacks. Talking to the owner was just like chatting with family as well. I picked up a tiny vintage Royals helmet, a vintage opening day baseball, and a couple of Hall of Fame basketball cards (shout-out to my addiction to the Michael Jordan docuseries The Last Dance from early on in quarantine). The owner did his best to talk me into a signed baseball from Buck O’Neil, but I had a few more stops to make for my pregame day before the first pitch.

After my fun purchases and all the warm feelings of nostalgia, it was time to revisit a personal favorite from our first trip here! We headed back to the Square and ventured across to 3 Trails Brewing. In the light of day, it gave off a totally different vibe compared to our last visit. At night, it felt like a packed bar, but during the day, it was a much more relaxed setting. Sitting at the bar and getting the chance to take in all of the different kinds of beer and have conversations with strangers felt incredible after being in pandemic mode for so long. I had really missed the feeling of meeting a stranger over a pint and having the freedom of getting lost in conversation. The owner and bartender were clearly beer aficionados and gave me the rundown of how the specific sours were aged. They even shared their insights on how Independence itself has evolved and changed over the years.

The town has a ton of local spots that people love to visit, but none may be more popular than good ol’ HiBoy Drive-In. The place had a line around the entire building (like usual, I’ve discovered), but I had to get a little snack. The chicken bites and fries soaked up some of that great beer from 3 Trails and set me up for an enjoyable night.

During my many conversations throughout the day, I learned some news that may have been the catalyst as to why the day had felt so special: it was Harry S. Truman’s birthday! He is truly the face of Independence, his beloved hometown, and his likeness covers the city. Had it been open, I would have really liked to finally visit the Harry S. Truman Presidential Library and Museum. I’ve had plenty of chances to hear about the history of Independence and Truman’s impact on it, but a trip to the Truman Library would take that knowledge to the next level. We were able to drive around the property and enjoyed the ambiance, but since it is closed for renovations, we’ll just have to save it for another day. I figured we’d use that time to visit some other old friends.

We chose to make a pit stop at Top Hat Winery, another spot we’d discovered last time. I know I sound like a broken record here, but I truly felt like I was part of the family when I stopped in to say hello. The owners and workers all cheerily joked and assisted us with tasting many different kinds of wine. As we walked out the door, it almost felt like I’d be back there every weekend as we locked in some inside jokes and walked away with a couple of bottles in our hands.

In the mood for some outdoor fun, we left the winery and headed to Cool Crest for miniature golf. I was determined to avenge my horrific loss to Ann from our last trip. We had just enough time to get in a quick round before the game. Unfortunately, I’m still in search of that victory, but it was still a lot of fun! It’s the perfect afternoon activity and encourages some healthy competition for friends and family alike.

It was finally time to roll on over to Kauffman Stadium—only five minutes from Cool Crest—to watch the Royals take on the White Sox. The K is in the same complex as Arrowhead Stadium, home of the Kansas City Chiefs, meaning Independence is right next door to championship-caliber sports.

It had been such a long time since Ann and I had been to a Royals game that the stadium had seen some major upgrades! Discovering the Craft & Draft bar was delightful, and it was a real treat to see so many new local beers on tap. Plus, there was no shortage of snacks, goodies, and memorabilia. I was also lucky enough to receive a Royals-branded welcome mat that the first 10,000 fans got upon entry. Once we settled down and found our seats, we got to chow down, drink up, and finally enjoy the game. Unfortunately, the Royals let a few runs go in the first inning, making it difficult to stage the comeback. Despite this, it was still so electric in the stadium— after months separated from their team by a screen, people were definitely happy to be at the game in person. Before the weather took a stormy turn, we decided to head back to Ophelia’s and turn in for the night. 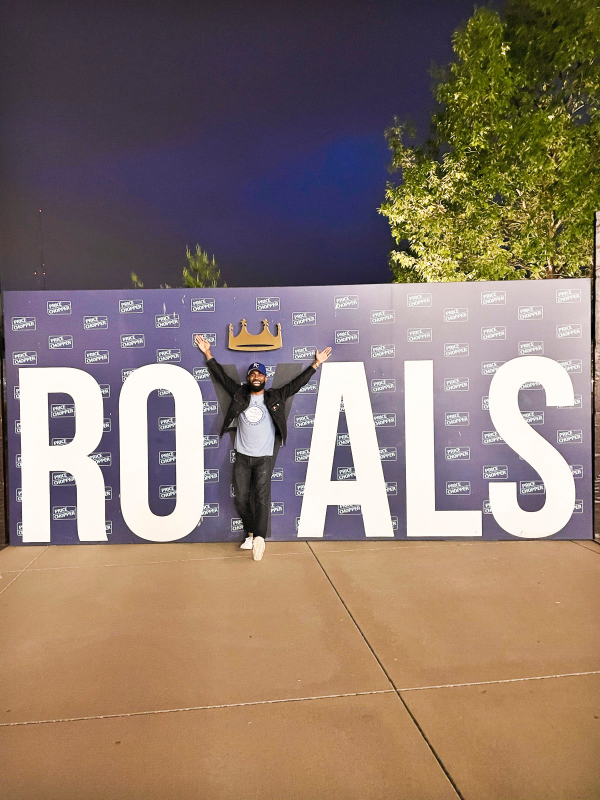 I can’t recommend enough the people and places that we had the pleasure of visiting. Independence, MO, is a place that’s just quaint enough that you really do just feel like family wherever you visit. There’s no end to the gems we keep discovering every single time we visit Independence—and bonus, it’s less than a 20-minute drive from Kansas City. I can’t wait to find out what else we’ll discover next time.